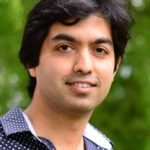 Siddharth obtained his Bachelor’s degree in Microbiology in India, after which he obtained a Master’s degree in Biochemistry and Molecular Biology at the University of Bremen, Germany. In 2009, Siddharth started his PhD in Biophysics at the University of Basel in Switzerland, for which he got awarded Summa Cum Laude. In 2014, he started his Postdoctoral research at the Delft University of Technology. During his Postodoctoral research, Siddharth has dwelled into the realm of synthetic biology, engineering bottom-up biochemical systems such as lipid-based vesicles and membraneless coacervate organelles, in order to improve our understanding of living organisms. He pioneered a physical chemistry-based microfluidic technique (abbreviated as OLA) to produce cell-sized liposomes. A high-throughput biocompatible production with an excellent encapsulation efficiency has made OLA a versatile and a user-friendly technique. Using this novel on-chip approach, they are able to control and manipulate the vesicles, such as grow and divide them, and also encapsulate different cellular protein machineries, with the ultimate aim of designing an autonomous growth-division life cycle of vesicles.

Siddharth will talk about his efforts at engineering bottom-up biochemical systems to pursue the grand challenge in synthetic biology: creating an artificial cell. They kick-started this highly ambitious task by creating micro-containers, such as liposomes, that could potentially act as architectural scaffolds for synthetic cells. Siddharth developed a physical chemistry-based microfluidic technique (octanol-assisted liposome assembly, abbreviated as OLA) to produce cell-sized and cell membrane-mimicking lipid vesicles. Using this novel on-chip approach, they wish to mimic, in a synthetic and minimalistic way, the universal growth-division cycle of living cells. Siddharth will talk about their efforts at achieving autonomous liposome division, about their recent success in achieving membrane tension-mediated growth of liposomes and about his latest endeavour with biomolecular condensitaes, which can potentially be used as membraneless scaffolds for synthetic cells. With this, he hopes to achieve having a synthetic cell with a high level of complexity and biochemical regulation. Siddharth is excited to show you why interdisciplinary research is the right approach towards the creation of synthetic cells!