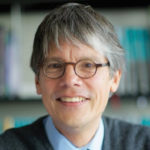 Sjoerd Verduyn Lunel is currently a Professor of Applied Analysis at Utrecht University whose research is at the interface of analysis and dynamical systems theory. Part of his work is devoted to a distance-based analysis of dynamical systems with promising applications. This approach allows extracting the dynamical behaviour of a system from time series data only. An example of an application of this study is the classification of asthmatics and COPD patients.

During his career, he has been the Head of the Leiden Institute of Advanced Computer Science as well as the Dean of the Faculty of Sciences at Leiden University. Nowadays, he is a member of the Chair of the board of the national platform for Dutch Mathematics and the Scientific Director of the Mathematical Institute at Utrecht University, and last June was reelected officer of the European Mathematical Society, where he has been the Secretary since 2015.

Sjoerd will talk about how measurement data of repeated experiments can be stored in dynamic time series. For example, the recorded response of the lungs at regularly sessions under a forced oscillation technique (FOT) regime and a non-invasive lung function test in which a small pressure oscillation is superimposed on the inspired air, can be stored in a time series. Time averages of these signals have proven useful clinically to discriminate between various respiratory diseases, but the dynamic of the FOT signals, i.e., their specific changes over timescales of different lengths, contains much more information. The main challenge is how to extract and interpret this dynamically encoded information in time series. In this talk, Sjoerd will discuss new algorithms to explore the dynamics in time series. As an illustration he will explain how FOT data can be used to classify between patients suffering from asthmatics and patients suffering from chronic pulmonary disease (COPD).